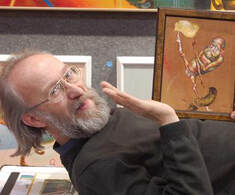 ​Artist Statment
I began my career as a painter in 1956 when I was two years old. My mother says that
as soon as I discovered a pencil and paper I began to draw.
Rejected from entering The Vilnius Art Academy at the age of 18, because I failed the
History of Communist Party of Soviet Union entrance exam, I studied art myself in native Lithuania, and later on throughout Europe.
I view the world as a strange, complicated and often not a very nice place.
I try to reflect and study the interplay between nature and psyche, to bring forth tradition,
but carry it further into realm of the unexpected. Sometimes it is the color which leads one
in and out of the maze of form. In these particular works, the color is actually creating a sense of irony.
In mixed media paintings I use both implied illusions, as well as the actual physical content, which helps me to create a physical and psychic phenomenon of color interaction.
When I paint, I forget about time. The process of creation is complicated and very intense
for me. Hundreds of additional details emerge while I am working. The pressure is so high, that I can describe my style of work and state of mind as “five seconds to insanity”.